Tuesday, October 13, 2015 6:00 PM Kearns High School AWAY 1 Olympus High School HOME 3 Game Recap After a slow start in game one the Titans came back with some fire in the next three games to earn the win over the Cougars. Clara Smith stayed solid on defense with twenty digs, while Zarya

Friday night was senior night, as the Titans hosted the Murray Spartans in a Region VI showdown.  Olympus held off a late Murray rally, defeating the Spartans 33-22.  This victory secured at least a share of the region championship, their fourth in the last five years, and a top seed in the 4A state playoffs.

Girls Tennis for the second year in a row has won the state championship! The girls ran away from the competition on the second day of the tournament, with a score of 23 to 10 beating Skyline, who took second place. Listed below are the individual and doubles results for today. 2nd Singles, State Champion 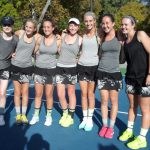 The Olympus Girls Tennis Team made strong statement on the first day of the Girls State Tennis Tournament for 4-A.  The defending State Champions qualified all of the team for each of the positions at the tournament with either a first, second or third seeding.  Playing solid tennis,  the girls won all of their first

Last weekend the Titans took home some more hardware at the Park City Invitational. The varsity boys finished 1st in the 11 team field, outdistancing second place American Fork 42-76. The JV boys were 2nd behind American Fork. The varsity girls were 1st as they edged Wasatch 37-47. The JV girls were also 1st, posting the lowest

The boys golf team finished off the season at the state tournament in midway at soldier hollow tuesday afternoon with an 8th place finish.  After day one the Titans were in 6th place after a score of 296, but a little tougher day on tuesday, with a score of 309, led to an 8th place

Monday, October 5, 2015 6:00 PM Cyprus High School AWAY 2 Olympus High School HOME 3 Game Recap After a roller coaster of a game, lady titans were able to pull together a win over the Pirates. Tessa Nebeker was the spark that lead the way in games four and five to the victory. Box 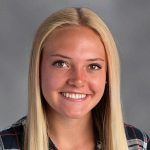 Congratulation to Olivia Hoj who was selected as Academic All-state for Cross Country. Coach Mitchell has this to say about Olivia. “Olivia is a great athlete, fantastic student, and team leader. She has a 4.0 GPA and has contributed to our team culture with her strong character and caring personality. She realizes that cross country

No Events This Week

Events are added by athletic staff.
View All Events